When does the brain disconnect and why would disconnection happen? Disconnections between neurons likely happen for many different reasons, both in normal and pathological physiology. In addition to neurons, there are multiple cells that may be involved in maintaining or removing the connections between neurons. Microglia in particular, are involved in pruning synapses and removing cellular debris. 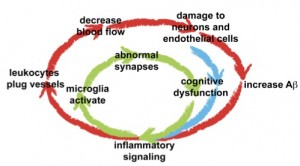 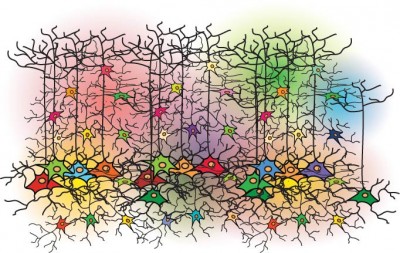 Both clinical research and experimental work suggest that cerebral blood flow is impaired in Alzheimer’s disease (AD). In addition, chronically increased inflammation is observed in both AD patients and animal models of AD. It is likely that there is a mutually reinforcing cascade of injury where AD pathology drives vascular injury and vice versa. Microvascular strokes have been shown to increase the rate of Aβ deposition in the brain. Our preliminary data shows that blood flow at the capillary level in mouse models of AD is also compromised. This suggests that decreased blood flow can accelerated AD, but as AD progresses blood flow to the brain will also decrease. This vicious cycle of damage suggests the need to treat the vascular component of AD as well as Aβ aggregation.